The story of Nitisemito, "The Kings of Kretek"

Last Weekends, me and my friends from university, pay a visit to Kudus city, the city which is located around 70 km away to the east from Semarang. We did our assignment from Ekonomi Pertanian (Aggricultural Economics) subject to collecting data from Sugar cane farmer and also sugar factory in Kudus to complete our assignment. 1,5 hours ridin’ my motorbikes, finally i reached this city on 10pm, and this is my first time i’m ridin’ my motorbike outside the city of Semarang alone, hehe. 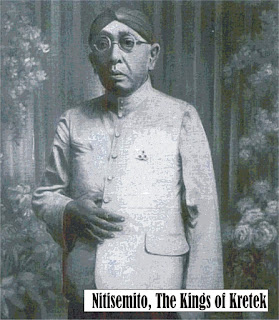 Well, i’m not going to share about my experience there, but there’s one story that really interested me. That is about the Kudus city is so famous for its cigarettes, so this city also called as “Kota Kretek” (The city of kretek). The kretek it self was found by the javanesse, but nowadays, only small number of javanesse company handled this business, the others was controlled by chinesse. In fact in the early of 20 century, there was a Javanesse Tycoon named Nitisemito that ruled this business. Even if we pray in the great mosque of Kudus actually, Pekalongan, Magelang, and another city in Middle Java especially, we could find a stand pendulum clock with a Nitisemito cigarettes company, “Bal Tiga” trade mark. Seems that all of this clock are Nitisemito’s company gift. So, who is actually this man? What is he and his company story? Well, lets figure out

Nitisemito born from an ambtenaar (civil officer) family on 1863. His Father was a regent in Kudus City. Not like the others peeps who born from its kind of family, Nitisemito choose himself as a businessman. Firstly his business on textile, then in the early of 1910, he start his business in cigarettes business named Bal Tiga Cigarette. He concern on Kretek type of cifgarettes. Well, This is why he called as “The King of Kretek”, eventhough the founder of its kind of cigarettes actually not him, but a Kudus people also named Jamhari.

On that age, Nitisemito was already invented a promotional for his product like a modern company. He used a gift to interested the consumers. A couple of Bal Tiga pack can be exchanged with a goods like plate, a clock, until a bike! Also he promote his product through carious media that available, mostly through newspaper. His business start ruled the cigarettes market. A lot of Kudus people say that he wan owned a large scale of land in the Menara Region, a region that located in the heart of Kudus city.

His business start to declined since the Chinesse-Javanesse Riot on Kudus on 1918. The riot started when the chinesse beated the javanesse people when some of the javanesse insulting the chinesse festival. Well, many peeps also said that the riot actually caused by a unhealthy business rivalry between businessmen. This riot that known as “Peroesohan di Koedoes”, its really affected to all sector of industries in Kudus city. Many of house, warehouse, and factory was burnt down. Many of javanesse businessman also being arrested by the colonial police because of many of them blamed as the provocatore, mostly the businessmen that incorporated with Sarekat Islam (SI)organization.

The Bal Tiga Company fortunately can survive from its hard period, but suddenly a big problem shocked this company. The colonial government accused the company embezzling tax, and also many rumours there were an internal affairs inside the company. The company was didn’t developed well as in the past, moreover during the Japanesse occupation. The stories of this Javanesse tycoon ended when he died on 1953, and no one of his descendant become his successor. But the histories cant be bears his named as one of the succesfull javanesse businessman. Like most of the Kudus people remembered him